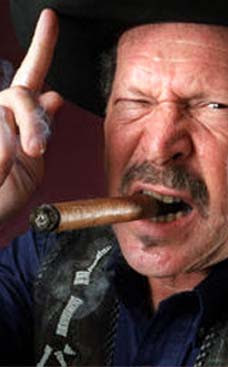 Kinky Friedman announced that he is running for the Democratic nomination for governor of Texas in the 2010 primary election. One of the main issues in his campaign platform is the abolition of the death penalty. In 2005, while running for the governor of Texas as an independent candidate, he was approached by a group of TSADP members at a Border’s bookstore in San Antonio asking him about his support of the death penalty. After book reading, he signed a TMN petition in support of a moratorium on executions. The Kinkster said that his main concern was to focus and to be “Damn sure we won’t execute the wrong guy”. Mr. Friedman went so far as to boldly state he would find an alternative to ’ “Eject ‘em or inject ‘em” policy on the death penalty. Presented with the petition, Friedman said, “I’ll sign anything but bad legislation” and in both a emblematic and Kinky move signed the moratorium petition, proving that he’s proud to be a man of his word and his beliefs.

In march 2006, Kinky testified in favor of death-row inmate Max Soffar, who he believes to be innocent. In 2008, Kinky endorsed Travis County District Attorney candidate Rick Reed, who has had the courage to stand up and candidly tell the voters of Travis County that, if elected, he will uniformly seek imprisonment for life without parole, rather than the death penalty, in all capital murder cases.

Here’s the way I see it: Democrats + Independents = Victory.

I was serious when I ran for governor in 2006 and I’m serious now. I am a humorist, but I know these are not humorous times for a lot of us. Part of the reason is the pathetic lack of leadership at the state level. The last governor, I believe, who was truly on the side of the people of Texas, was Ann Richards. She was a very funny lady – she was also a great governor. I’ll take my cues from Ann Richards.

It’s time to end corporate handouts, get rid of the death penalty, get rid of the TAKS Test, and get rid of the Republican stranglehold on this state. Jim Hightower told me he believes the main reason we’ve lost every statewide race since Ann Richards is the inability of our candidates to excite the grassroots. Jim is talking about rural folks, working people, independents, libertarians and even disgruntled Republicans (many of whom used to be Democrats and should be on our side).

I intend to run a serious campaign, one that grows the party. I intend to visit and listen to the voices of neglected communities, small towns, suburbs, and rural areas, often where Democrats have lately feared to tread. This, I feel, is the very definition of being a Democrat. I intend to play by the rules. I will endorse and campaign for whomever wins the Democratic Primary.

Will the independents support me and vote as Democrats? I think they will. I think many Texans appreciate and respect anyone who gets knocked down and gets back up to fight again. Will Democrats take me seriously? I think they will. When Barbara Jordan, who may well be Texas’ only modern-day statesman, was a young girl she was never very serious in school. The teachers reported to her father (Ben Jordan, a very strict part-time preacher), that though she was the smartest kid in the class, she was a perpetual cut-up, a troublemaker and a class clown. When Ben had finally had enough of Barbara’s antics, instead of reprimanding her with his customary fire and brimstone iron-hand style, he tried a different approach. “Barbara,” he said, “I’ll stick with you just as far as you want to go.” That turned her around, and the rest is truly history.

So I say to Democrats who may not yet take me seriously, I’ll stick with you just as far as you want to go. If we stick together we’ll go very far indeed. All the way to the Governor’s Mansion!

PS: Please show me you’re serious about Texas’ future too by making a campaign contribution now to Texans for Kinky.

Below is an undated video of Kinky talking about the death penalty.